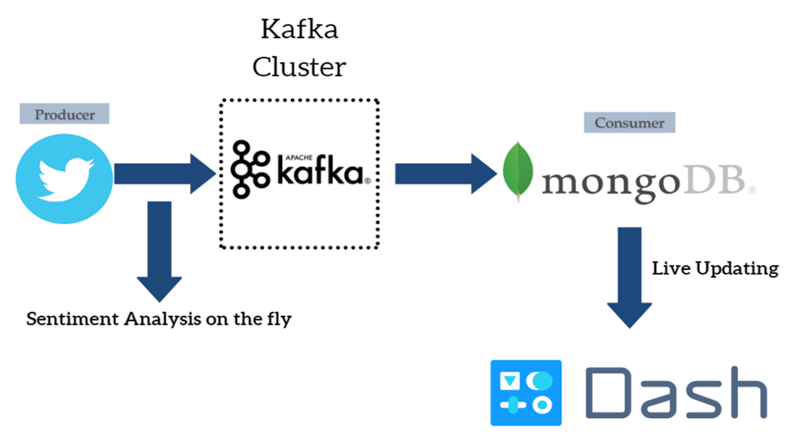 In this post, I want to share a cool project I recently did as part of the Data Engineering module of my PDEng program. I will show how to do simple twitter sentiment analysis in Python with streaming data from Twitter.

The data is streamed into Apache Kafka, then stored in a MongoDB database, and finally, the results are presented in a dashboard made with Dash and Plotly.

I hope you are excited. Let’s dive into it!

Caveat: This tutorial/demonstration is quite advanced, so if you are new to Python and Data Science/Data Engineering, it may be a bit tough to follow and replicate. I provide all the code on GitHub (additional instructions about the code can be found on the Repository’s readme) and try to explain the steps needed. However, some familiarity with Apache Kafka, Python, MongoDB, and Dash/Plotly is preferred to be able to follow along and replicate what I did. Different technologies are involved and I cannot give a detailed tutorial in all of them in just this blog post. 🙂

The point of the dashboard was to inform Dutch municipalities on the way people feel about the energy transition in The Netherlands. The government wants to terminate the gas-drilling in Groningen and asked the municipalities to make the neighborhoods gas-free by installing solar panels.

However, it is possible that people are not in line with this decision. We began with the assumption that people share their opinions and feelings on social media platforms.

For the purpose of this project, we focused on Twitter. Here, the data pipeline that we put in place can be seen. 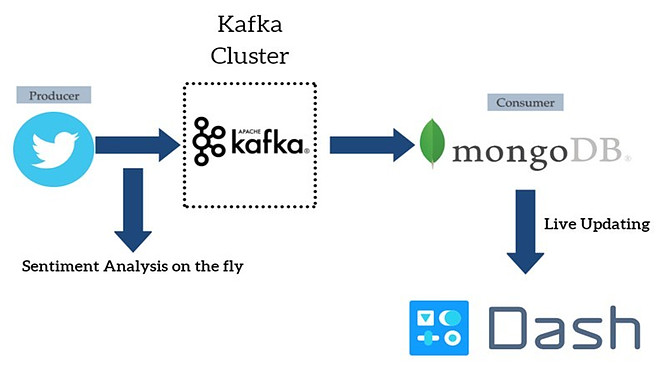 In our case, data from Twitter is pushed to the Apache Kafka cluster. Additionally, sentiment analysis is performed on the text of the tweets before the data is pushed to the cluster. This part is called a Twitter producer in terms of Kafka terminology.

On the other side, there exists a consumer that subscribes to the Apache Kafka topic and stores the JSON objects of the tweets to a MongoDB database. Finally, the results are presented in an interactive dashboard that is updated live using Dash and Plotly. Following comes a more detailed explanation of the different parts of the pipeline.

Things were kept simple here. The cluster has only 1 topic with 6 partitions and a replication factor of 1 (we only deployed locally so there was no need for distributed processing).

The producer fetches tweets based on a specified list of keywords. The keywords that were used for this project can be seen below. The commas between the keywords work as logical OR and the space in each keyword phrase as logical AND.

Moreover, the fields that the producer is fetching from the tweets’ JSON objects are presented in the following table.

Finally, the fetched JSON objects are published to the Apache Kafka cluster.

The Sentiment Analysis is performed while the tweets are streaming from Twitter to the Apache Kafka cluster. The analysis is done using the textblob module in Python.

Because the module does not work with the Dutch language, we used the following approach. First, we detect the language of the tweet. Next, if the language is Dutch we translate the tweet to English using the Google Translate API. 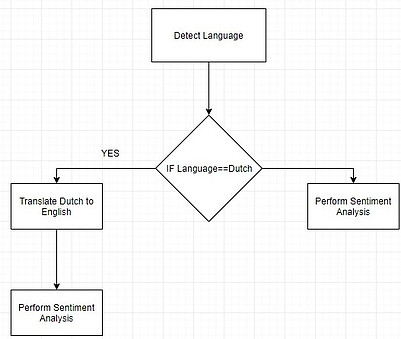 The MongoDB Consumer is also written in Python. The consumer uses the pymongo module to connect with the desired collection of the MongoDB database.

The need for such a consumer is that Apache Kafka is not a database. The data is lost after some days pass. For that reason, we have to store them in the MongoDB database for future use.

Finally, a NoSQL database such as MongoDB was chosen because it is made for working with JSON objects. Moreover, it provides flexibility in adding or subtracting fields we would like to fetch from Twitter in the future.

Finally, the results are shown in an interactive dashboard made using the Dash-Plotly framework in Python. It makes use of Live Updates to update the data that is shown to the user every 5 seconds (the interval can be specified).

The overall structure of the dashboard can be seen below.

There are four sections in the dashboard. Each one will be discussed in more detail.

Section 1 of the Sentiment Analysis Dashboard

Section 1 of the dashboard shows a table with the 5 most recent tweets that happened about the energy transition. Additionally, the date and time of the tweet are shown, as well as the sentiment and subjectivity scores that were explained previously.

The tweets are updated in real-time as they are fetched from Twitter. Naturally, at the moment tweets that are not relevant are also fetched by the data pipeline. 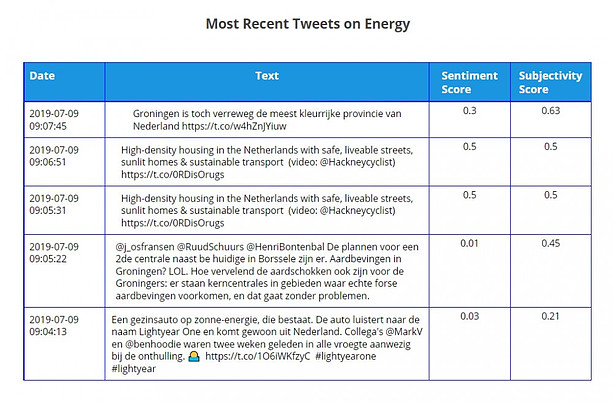 Section 2 of the Dashboard

Section 2 showcases a vertical bar chart with the users that were most active in tweeting about the energy transition. Furthermore, if the dashboard user hovers over the bars, the description of the twitter user will pop up, if it was available in the data. 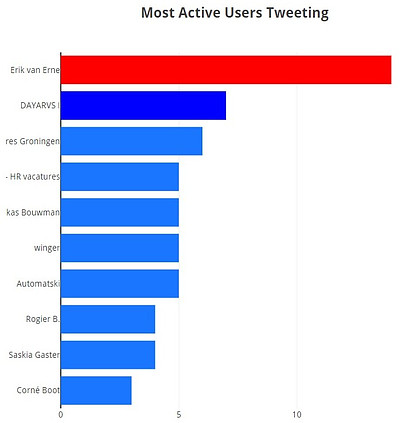 Section 3 of the Dashboard

Section 3 showcases a horizontal bar chart with the number of tweets that happened per day related to the energy transition. Some bars are zero only because the dashboard was not running on our laptop these days.

In order to get full data, the dashboard should be deployed on a server and run 24/7 (Heroku is one possible option, as well as Google Cloud, to name some ideas). 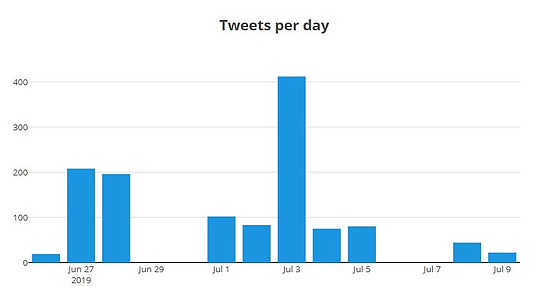 Section 4 of the Dashboard

Finally, section 4 of the Dashboard showcases a donut chart that informs on the total percentages of positive, negative, and neutral tweets fetched by the data pipeline. 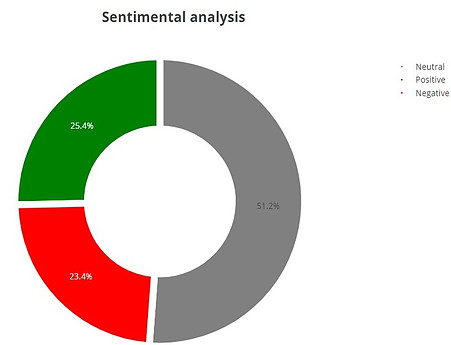 To conclude, while working with the dashboard we came upon several interesting examples of tweets. For example, below you can see two of those interesting tweets.

Thus, there seems that indeed discussion is happening about the energy transition in The Netherlands on Twitter.

Thank you for following through this post and I hope you found the project interesting. In case you were overwhelmed realize it is completely fine because many different technologies are involved and this post is not really a detailed tutorial.

If you would like to use the code feel free to do so, though I would appreciate a star and fork on GitHub :). In case you find any mistakes in the post and/or code I would be very happy to hear them out.

If you have any comments or questions I would love to read them below.

Also, be sure to follow me on social media (links in the sidebar) or contact me directly here.

4 thoughts on “Twitter Sentiment Analysis in Python – With Code” 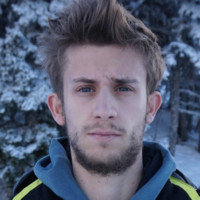